Having previously won the award for Best Online Learning Experience in 2017, and been shortlisted for the same accolade in 2018, the LINC Programme has once again received a nomination for an Education Award. This year the programme has been nominated under four award categories, these are:

The Education Awards recognise, encourage and celebrate excellence in the third level education sector on the island of Ireland from both State and privately funded institutions. The award categories are designed to highlight the key areas that impact upon student performance and provide opportunities for educational institutions, their employees and contributors to have their achievements recognised across the various important facets of their operations.

The LINC Programme is a one-year, Level 6 Special Purpose award delivered by a consortium led by Mary Immaculate College (MIC), which includes Early Childhood Ireland and Maynooth University-Froebel Department of Primary and Early Childhood Education. The course is designed to facilitate practising early years’ educators to promote the inclusion of children with additional needs.

Upon hearing of the nominations, Fintan Breen, National Programme Coordinator for the LINC Programme said “I’m delighted that LINC has been shortlisted for the Education Awards again this year. It’s a tribute to the hard work of the full team and is further testimony of the impact LINC is having on the inclusion of all children.”

Commenting on the shortlisting, Teresa Heeney, CEO of Early Childhood Ireland said “On behalf of everyone at Early Childhood Ireland, I am absolutely thrilled for our LINC colleagues on their nominations in the Education Awards. The nominations speak to the tremendous impact of the Leadership for INClusion programme since its launch and to the commitment of our sector to supporting meaningful, inclusive experiences for all children. It is a privilege to work alongside the team from LINC, whose vision for children inspires us every day. Warmest congratulations to all of our LINC colleagues on these nominations, and very best of luck with the awards!”

A sentiment echoed by  Professor Marie Mc Loughlin, Head of the Froebel Department of Primary and Early Childhood Education, Maynooth University who added “We are delighted that LINC’s successes are once again recognised by being nominated in four categories for the Education Awards. This endorses the collective efforts of a highly energised team who have worked tirelessly to create a vibrant online learning platform which has successfully achieved tremendously high levels of student engagement. The team’s efforts are also deservedly acknowledged for the research component of the programme which has the potential to bring widespread transformation in the early childhood sector.”

No stranger to awards, the LINC Programme was also nominated last year for an Aontas Star Adult Education Award and won the prestigious Jennifer Burke Award for Innovation in Teaching and Learning. Running from September to June, LINC contains online and classroom based sessions in order to ensure a flexible and quality learning experience, enabling early years’ teachers in full-time employment to attend this important continuing professional development (CDP) programme. While over 80% of the programme is delivered online, the classroom based sessions are offered in ten regional centres in order to ensure access to practitioners across the country. Last October saw the second cohort of students graduate from the programme when over 850 students from 28 counties were presented with the Level 6 Special Purpose Award.

The application process for student places in the 2019/20 LINC Programme will open in March, any queries should be directed to the LINC Team on 061-204545 or email: linc@mic.ul.ie. Further information on the programme can be found on the LINC Programme website here. The winners of the Education Awards 2019 will be announced at an awards ceremony on Thursday 21 February at the Ballsbridge Hotel, Dublin. 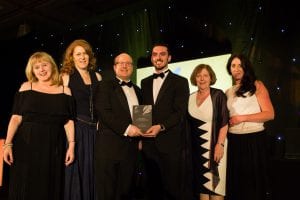 The LINC Programme team accepting the award for Best Online Learning Experience at The Education Awards 2017.