Working in Partnership with Children: The Quiet Room

In this week’s blog, Therese O’Brien, Owner/Manager of the Early Years Pre-School in Gravelstown, Kells, Co Meath and LINC graduate, describes how working in partnership with children has helped her best utilise the space in her setting. 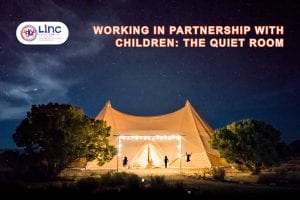 At the start of each year we try our best to become familiar with each of the children as individuals, and as a group how they interact with each other and what brings them together. Each year this is different. One year all the children had a great love for tractors and all things related to farming. This year from a very early stage we noticed the children regularly playing under the tables, making tents and wanting to play in the back hall where there is no natural light coming in. This area only has one light bulb and the children would request that we turn it off. Within the first few months all the children took part in this type of play and we became experts at making tents.

During a staff meeting we talked about how we could extend the children’s interest in this type of play. I was lucky to have a spare room, mainly where we stored equipment, and I was always threatening to clean it out and use it. So once the children had left for the day we spent the evening moving equipment and cleaning until it was ready.

The next morning, I was keen to show the children our new room, as they were always excited about following me in there when I was getting equipment. I went in with six of the children. The first thing they enjoyed about the new room was running around the space. Once they tired of this, we sat on the floor and I told them I was thinking of making this into a relaxing room where we could read books. I noticed Abbie lying back on the floor and she said, “I would like if we had dream catchers on the roof”. I was instantly intrigued with this and I listened to the children talking about their dreams, some good and some bad ones. Jack said, “could the room be dark”, and Amelia suggested we get pillows and cushions, Sophia wanted teddies and the ideas just kept coming. I was 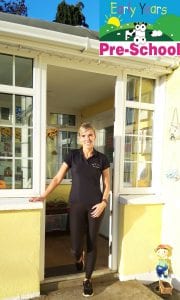 really taken aback with all the ideas the children were coming up with. It surprised me how much the children had to offer, how they enjoyed planning, and their  excitement at being involved. The talk of the new room, which was now being called the quiet room, went on all day and the very next morning the parents said it was the topic of discussion at home that evening.

The next morning the children were eager to get cracking, so we hung some blackout curtains on the windows and put bean bags on the floor. Sean, who said he was a little afraid of the dark, asked if we could get some torches and Conor informed us that he would bring in his glow in the dark elephant. Gradually the room came together with some help from parents who sent in night lights, battery candles and even smelly incense sticks. Then, to top it off, a delivery arrived at the school one morning in a very big box, our AIM pack. The excitement was electric when we opened it and found the black-out tent. Straight away it was brought to the quiet room.

Reflecting on this project, I’m delighted with the new room and the extra space it affords the children to play. However, it was the children’s involvement and their knowledge and ideas that really impressed me. I underestimated the contribution children could make to the project if given the opportunity. It gave me great satisfaction knowing that the children felt important and involved. The feedback from the parents was very positive, comments like “she’s all business about this new room”, and “there’s great excitement with the quiet room”, one parent even spent the day going around the shops looking for glow in the dark toys.

Working in partnership with the children has brought many benefits to our setting and it will influence how we plan for the future.

The LINC programme would like to express its sincere thanks to Therese for sharing her experience with us. Applications for the programme will close on Friday, November 6, at 4pm. For more see www.lincprogramme.ie.